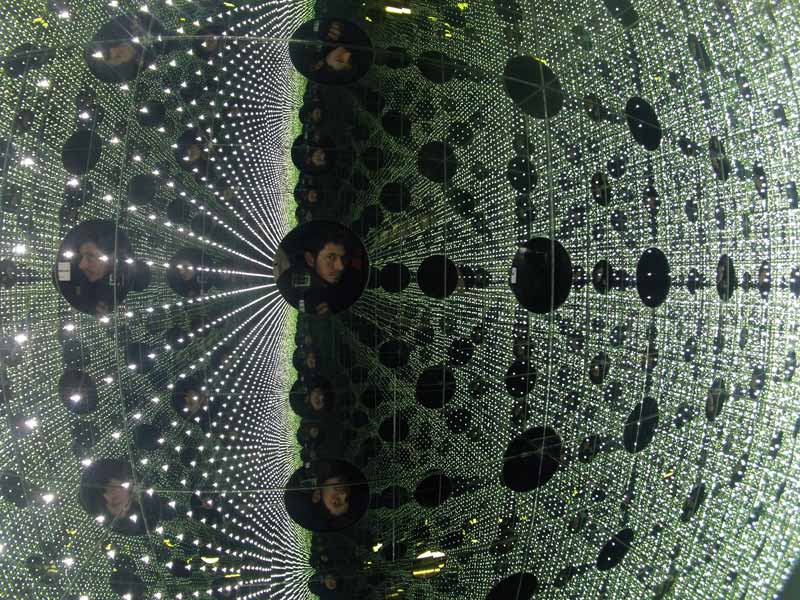 There's only the two of us here. Infinitely.

The installation is built up of two separate chambers, or so they seem at first, but in reality, they both open up at the top into one ample space, made extensive in perception by the fact that it is completely covered in mirrors. This is a discovery only for the brave and curious enough to face whatever phobias and go past the black curtain, into the darkness, and up the step, to be rewarded with a spectacular and luminous perspective, like stars in the sky by enriched with the viewer’s own reflection. This structure offers up two entirely different ways of experiencing the artwork’s environment. One is intimate, a discovery of the self in the multiplied infinity of the mirrors, while the other adds the benefit of the surprise encounter with another person. While the two people embark on apparently separate adventure, they reunite unexpectedly but happily, and the shared intimacy of the encounter cannot be replicated outside the installation. Both experiences are valid; the first offers introspection and self-awareness through multiplication and narcissistic enjoyment. The second prompts a conversation that stays in the box and is not necessarily a verbal one, but rather gestural and which turns into a study of the other person’s expressions and visual cues.

As the construction of the installation took longer than expected, and I was getting close to the deadline for presenting the simulations/visualizations of the diploma project, I called Călin to help me with some 3D renderings of the visitor's experience inside the infinity box. After several days of renderings in 3ds Max, the results looked spectacular, but later on, I figured out that it was only a hint of what the human eye can perceive inside the real piece. Conclusion: when working with a full-scale immersive mirror environment, simulations and (sometimes) photographs don't work, you need it built in order to test an accurate experience.